New construction homes can feel sterile and boring, especially when there is probably a house that looks identical to yours just a few houses down. We moved into our new construction home about two and a half years ago. The house was a “quick move-in”, which means someone had chosen all the finishes and then backed out of the sale. We didn’t get to pick anything, so it wasn’t really custom to our tastes. We’re happy with what we ended up with, but there have definitely been somethings we would have done differently and we’ve been slowly adding our touches to the house since we moved in.

Some changes have been simple and budget friendly while others have been time consuming budget busters. Of course, I’d like everything to be done at once, but half the fun of customizing your house is doing it bit by bit. Plus, we love a good DIY, so for us, half the fun is actually doing the project.

Below are three ways we’ve customized our new construction house- in order of skill level and budget. 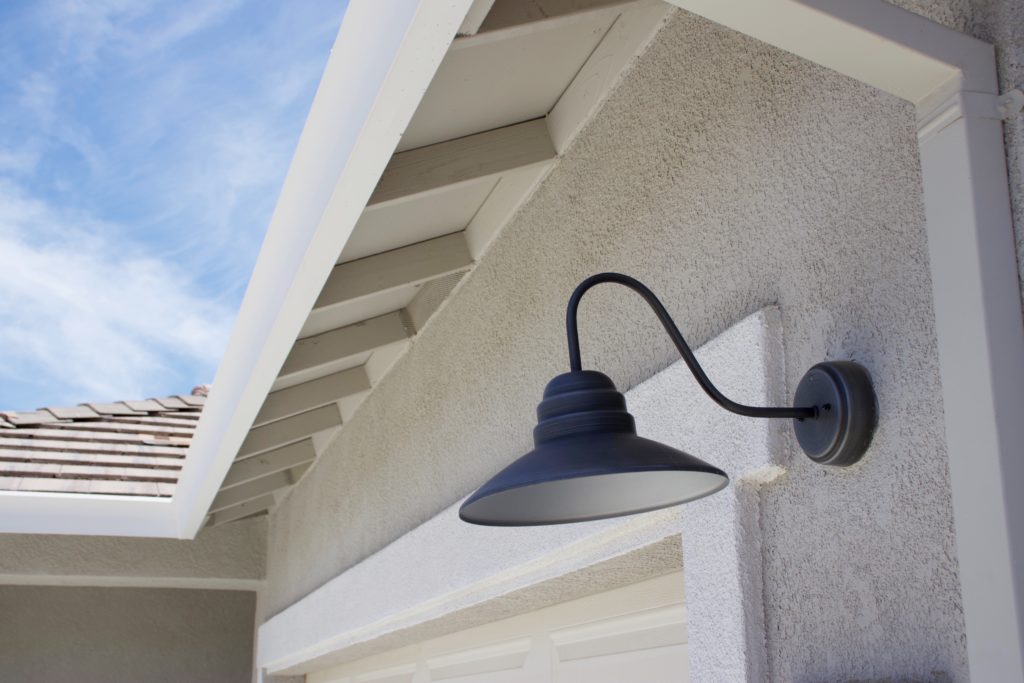 Almost all the finishes in a new construction home are builder grade (which means they got a deal because they bought so many of the same thing- not because it’s stylish or anyone was particularly fond of it) and same from house to house, so fixtures are the obvious thing to change right away to give a custom feel.

One easy thing we did was swap out the exterior light fixtures. We found these great solar ones at Costco for $20 a piece. They are super bright (which definitely makes our house stand out at night!) and because they are solar we never have to worry about turning on the porch light at night or turning it off in the morning. This is a similar option at a similar price point. Or, if you’re a Costco junkie like me, keep your eyes open for mine. They often carry the same things year after year! I’m classifying the board and batten wall as medium for the time it consumed. Depending on your DIY skills, this may be easy or hard. Materials for this ran about $250. You could definitely make this cheaper if you used different wood than we did, but that will require more sanding and painting. It has added so much character to our entryway and while I know neighbors have done similar things, this is unique to our home. We designed it from start to finish to match the modern traditional/farmhouse mish mash of the rest of our house and no one has anything exactly like this!

The subway tile herringbone backsplash has probably been the biggest customization we’ve made to our house so far. We hired it out, which has made it the most expensive, but depending on your taste, a backsplash could easily be tiled in a weekend, saving you hundreds on labor. The cost will also vary depending on which tile you chose. The tile I chose was fairly inexpensive, but herringbone is a complicated pattern. The same tile laid in a traditional brick pattern would be an easy DIY or could reduce the labor cost drastically. Another way to customize a new construction home is by making a space work for you. We had an area off the garage entry that was a giant cut out. It was a big waste of space that could have been upgraded, but wasn’t. One of the first things we did was build out a mud room, complete with a bench, hooks and hidden storage. The area is so functional for our family and provides a place for all of the purses, jackets, shoes, hats- all the stuff a family collects! You can also see the opposite wall and how we manage kid artwork here. Of course, I have other things I’d like to do to our home to customize it to our exact preferences. One of the hard things about a new construction house for me is that all of the things are brand new, and have no real reason to be replaced (looking at you ugly bathroom light fixtures!), other than aesthetics. Eventually, we will swap little things like that out, but for now they’re getting the job done.

What changes have you made to your home? What has been your favorite thing so far?