Dude. It has been a week around here.

Last Friday, I came down with the stomach flu out of nowhere. That same day, Isla got croup. Luckily (or not so luckily?) AJ had a random stretch of six days off, so it was kinda nice to not have to parent while sick, but it also felt like a monumental waste of his time off.

Just about the time we both were recovering, Nolan caught the croup and AJ caught a hybrid croup/stomach flu super bug. I think we’re finally turning a corner here, but wtf, it’s barely October! I’m scared for winter already.

If I had to give this week a meme, it would be this one. 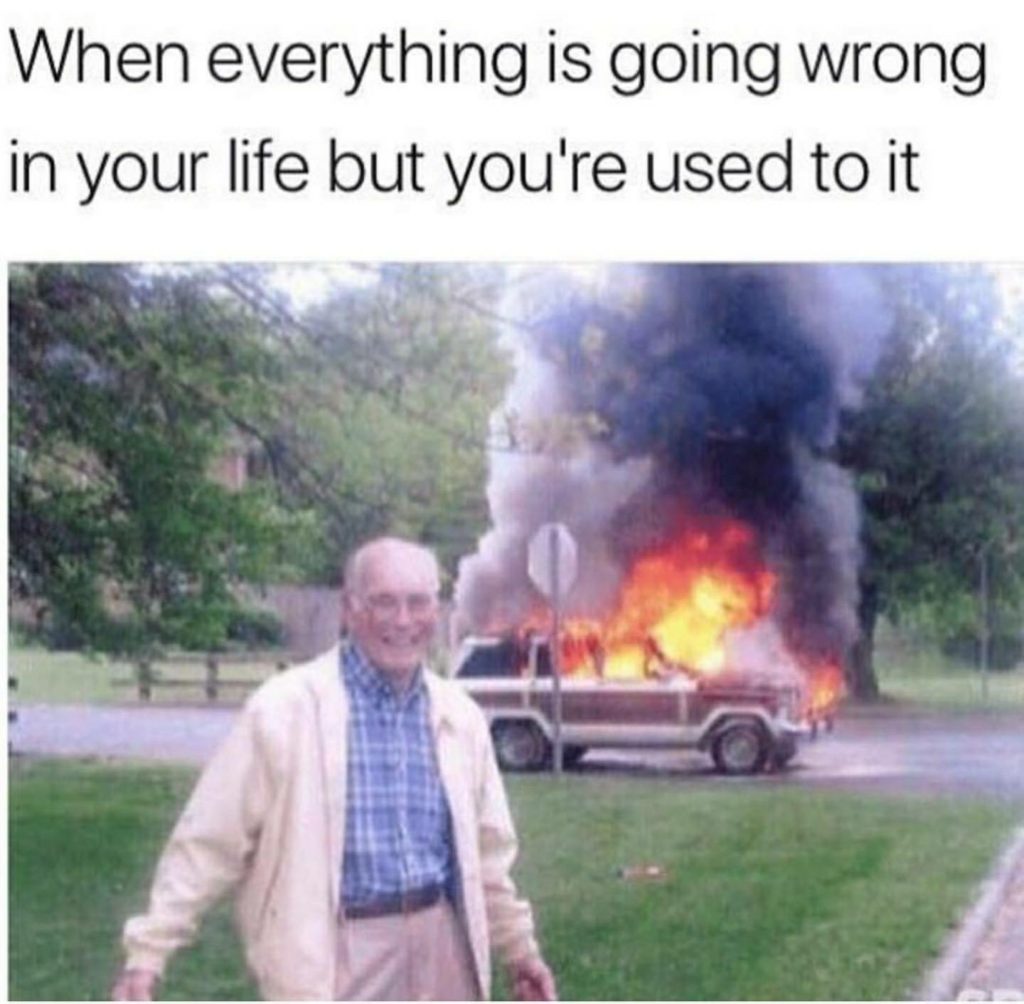 MOM WIN OF THE WEEK

Isla and I have kept our mums alive for about 3 whole weeks now. She thinks it’s great to be my “helper”. Every afternoon while Nolan naps, we fill up the watering can, she “helps” me carry it over and then “we” water them. Then she smells them, which mostly just consists of sticking her whole head in the plant. It’s been a fun thing to see her take interest in and want to be apart of with me.

MOM FAIL OF THE WEEK

My fails are always about Nolan! He fell on a toy and I heard him cry and my knee jerk reaction was “You’re fine!” because he’s a bull in a china shop and barrels through everything. Then I looked over and saw this big gash. Then, the next day, he fell in a bush, face first, of course. I just feel like I need to publicly announce that I don’t beat him. But 5 minutes with him and you’ll see that’s it’s impossible to keep him from doing half the shit he does. Ok, don’t judge, but is anyone still watching Teen Mom 2? It’s one of those shows I’ve watched from the beginning and the DVR just records it so I watch out of habit, even though I’m Facebooking half the time. I always root for these girls, but this season has been hard. Leah’s speaking (as she called it, because public speaking was too much?) is really bumming me out (It ain’t for you girl!) and I just can’t with the Brianna situation. I can’t sympathize for someone who is confused about how she got in the same position twice. Pretty sure you know how that happens. Ok, I just had to get that out because I don’t know many people who watch it anymore!

We’ve been planning our BOO-ze giveaway for a while now and it’s been so exciting to see it executed this week! If you haven’t entered, there’s still time!

We were lucky enough to get BankyGirl Creations, Daws & Gray, and BGD to collaborate with us on this giveaway. We love small shops and promoting them. If you haven’t yet, check out their cute shops!

I’m keeping my fingers crossed that we can keep our acts together long enough to make it to a pumpkin patch in this next week. Our porch has no pumpkins and I’m feeling like I’m going to be fired as a basic white girl soon.

Happy weekend! Just a friendly reminder to wash the first two layers of skin off your hands and stock up on Purell because cold and flu season is coming!