In the world of motherhood, perfectionists and sanctimommies are considered especially heinous. On the Internet the dedicated mothers who believe that okay is good enough despite what these other mothers say are members of an elite squad called the Okayest Moms. This is one of their stories.

Hi, I’m Heather and I’m a recovering Type A perfectionist. I’ve relapsed about a million times, but I’m determined to stay clean. Mostly because I’m just too damn tired and the fight is too futile.

Before kids, my life was controlled, organized and regimented because that’s how I like things. Predictability and consistency put me at ease and made me feel in control. Any mother reading this is already laughing at me, I’m sure. Looking back, I laugh at me, but I thought these would be good qualities to carry me through.

No one goes into motherhood thinking they’re just going to be mediocre. Which is fair. It’s a big decision and it shouldn’t be made on a whim.

When I was pregnant, I did all the things. I microwaved my deli meat because the second I was told I shouldn’t have it, it was all I wanted, so I did the diligent thing to avoid any guilt. I did the birthing class, the yoga, and packed a perfectly researched and curated hospital bag. The car seat, stroller and every other gadget were all top rated and obsessively chosen.

“See, it’s not that hard. It takes a little work, but it’s no big deal. You’re ready for this,” I told myself. It took a little organization and management, but that was where I shined. It was what was required to get the job done. That’s just what mothers do.

Before I knew it, I was holding an outside baby.  She wouldn’t ever go to sleep, she was constantly attached to me and she consumed our every being. Never mind the traumatic experience of birth. But I had my game face on. This is what mothers do, I kept telling myself. So I did all the things I was supposed to do.

My inner monologue that fueled my need for consistency and perfection went something like this: It’s fine. We’ll recover. We’re still using the fancy diapers. That’s got to be worth something. Plus you’re making the baby food yourself, and you’ve got a meal plan you’re sticking to that ends with dinner on the table every night and you’re actually getting out of the house and exercising and socializing.  See, nothing is wrong! I can do all the things.  I’m dying trying, but maybe that’s just what this new life is: killing yourself to do everything all the time for everyone. There will be time for yourself later, not that you even recognize yourself anymore anyway. See, I can be selfless! That’s what mothers do.

And for a while I managed that. I found a rhythm that lulled me into thinking we had weathered the storm.  I slowly started to get ahead and find a new normal, supported by a false sense of confidence.  Life became manageable, but instead of riding the wave for a while longer and settling into a new normal, we decided to get pregnant again.  “We’re already in the baby stage”, we thought, “it makes sense to have them so close together. This is a great idea!”

The inner monologue continued: we were really trying to wait for screen time. Eh, 18 months was a helluva run. Wow, that iPad sure makes car rides quieter. Then it was the housework. I’ll vacuum tomorrow. Those dishes can sit in the sink another night. Hey, while I’m thinking of it, I’ll just grab the giant pack of paper plates at Costco next time. Why bother cleaning up the toys tonight? They’ll just get pulled out again tomorrow. Oh, and looks like the washer is getting started again since the clothes still haven’t learned how to put themselves in the dryer.

Mac and cheese for dinner again, dear toddler? But you had that last night. Fine, just take it if it makes the screaming stop. Does it really matter? I’ve seen you eat worse things off the ground.

And then the rest snowballs. At first I felt guilty, because that’s what I was programed to think. I convinced myself that once I was no longer pregnant I’d be able to get us back on track. But then I started to realize that no one was dying, I was less stressed and life goes on. I was starting to see the light, but still held onto the idea of normalcy and consistency once the baby was here.

Then the baby came and it became very clear that Isla wasn’t just the strong willed child we chalked it up to be. Between life with two under two, a husband with an insane work schedule who also needed my attention, and a new diagnosis just to name a few, our life had turned into pure chaos. It was then that it hit me that I could continue on my crusade for consistency, routine and making any kind of plans, or I could raise the white flag. This was my rock bottom moment, if you will. The addiction to control and predictability had to stop.

You may be reading this thinking that I just gave up, and maybe you’re right. I prefer to think of it from the perspective that the only thing I did differently was to start to give myself some slack and to make my expectations of myself more manageable so that the expectations of my family would be too. It’s exhausting to be the wife and mother I always imagined myself to be. She was so perfect and did everything. But, she also had easy kids and she never fathomed this motherhood gig could be so damn hard.

Some days I live up to my expectations. On the good days, I stop and pat myself on the back for actually getting anything done, despite being interrupted a million times, instead of obsessively trying to stick to my to-do list (Which I still have–old habits die hard and thanks to this mom brain, if it’s not written down it’s gone forever) or recreate the success again tomorrow.

On the bad days, I’m pulling my hair out because the house is so dirty and I have a million things to do, but AJ got held over at work and will have to sleep in tomorrow morning instead of letting me sneak away for a few hours and Isla needs another snack now and Nolan is (literally) climbing the walls and we’re out of diapers so the circus has to go to the store in the pouring rain… and, and, and, and you know the rest. This inconsistency is the new normal. There is no going back. Two steps forward and one step back.

The bad days are inevitable, but I think the difference now is I have a little more perspective and hindsight that these babies really don’t keep, this hard work really is paying off and we are all going to be okay, even if it feels like we won’t right in that moment of witching hour chaos.

Once I began to give myself more grace and realize this wasn’t something to overcome, but rather hold on and follow, I began to enjoy being a mother more. Once I began enjoying the days, my confidence grew and and it’s been a snowball effect ever since. I was living under this assumption that if I could just work harder, get more sleep (Ok, to be fair, that one really would have made a significant difference.), have a better memory, be more organized, think farther ahead then I could overcome this season of life. If I could just be better, life would be better. It wasn’t until my perspective changed that I saw that this isn’t a problem to overcome or bring order to. This life doesn’t need improvement, but my attitude sure did.

I still get caught up in this thinking from time to time, but I can feel the anxiety and pressure building and I’m able to let it go more easily. It’s a constant work in progress to tune out what everyone else is saying because everyone has an opinion, but in the end, the only ones who know what our life is like and how hard we work is my husband and I.

It’s time we start being real and celebrating the reality of motherhood, whatever that looks like for you. It is probably different than mine, but your circumstances, beliefs and supports are different than mine. As long as you are serving your children and their needs and, of course, doing no harm, then that is enough. Let’s support each other, cheer each other on and be a little more empathetic to each other and ourselves, because that’s what mothers do.

Previous Post: « What It Means To Be An Okayest Mom: A Manifesto
Next Post: 10 More Podcasts You Should Be Listening To » 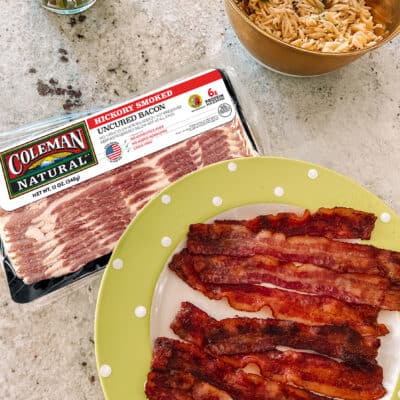