This post contains affiliate links, meaning, at no additional cost to you, we will earn a small commission if you click through and make a purchase. Thanks for supporting The Okayest Moms!

Our movie of the summer around here has been The Little Mermaid. Pair that with swimming all summer (“I’m splashing like a mermaid!!”) and a newly acquired Ariel costume (that could probably be mistaken as a second skin it’s worn so much) and the mermaid obsession has been strong. So a mermaid birthday theme was pretty obvious.

This is the first year that Isla has really understood her birthday and the concept of a party. She actually told me she wanted a mermaid birthday party when I asked, which was pretty shocking since she doesn’t answer the majority of my questions on a daily basis.  How could you not give the girl the mermaid birthday party of her dreams when she tells you that?! We will do just about anything to encourage her using language, and if it takes a mermaid birthday party, then that’s what we’re going to do. The party was mid afternoon (my favorite party hack- no one expects a meal!), so we did some light appetizers/small bites kind of food. I turned to Pinterest for the clever names for the food. We had shells and cheese (mac and cheese), algae (guac), seaweed (spinach dip), driftwood (pretzel sticks), fish (goldfish, obviously) and silver dollars (snickerdoodles with sliced almonds on top). 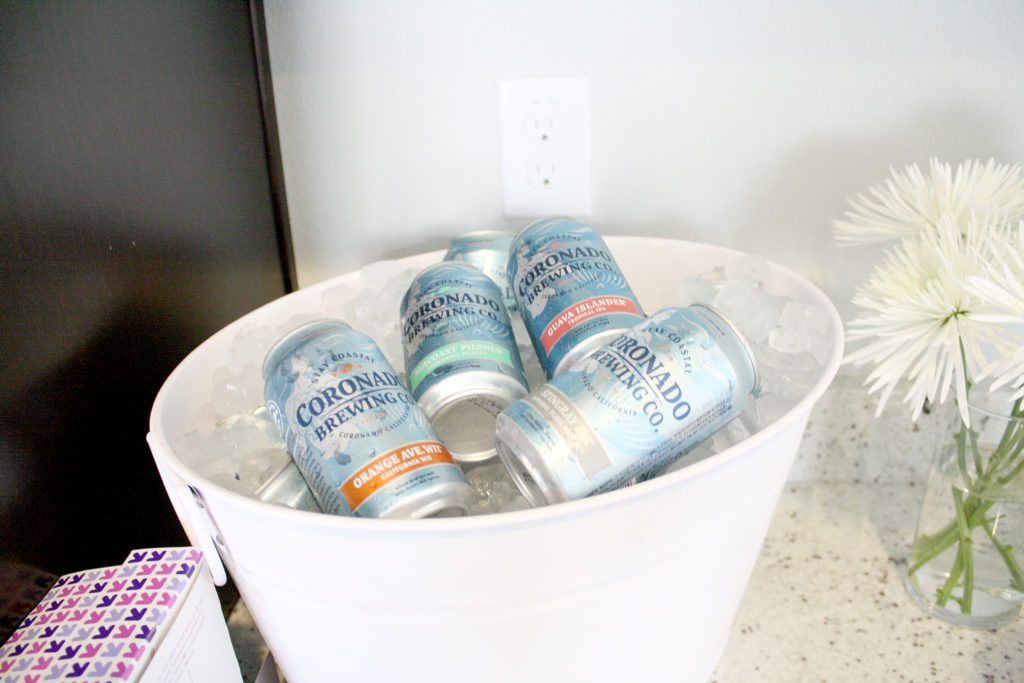 I also made a peach and strawberry sangria and a sea water punch for the kids. This was just blue Hawaiian Punch, lemonade and a ton of sparkling water to try and water it down. The cake was done by Shay’s Sweets. If you’re local, I can’t recommend her enough. The design was exactly what I had in mind and it tasted amazing. The cupcakes were so cute too! She is so skilled! And she delivered. It was so nice to have one less thing to worry about the day of the party.

This custom cake topper came from Charlie’s Party Shop. They were so easy to work with! I gave them very little direction (Pretty sure I said something like “Isla is turning three and having a mermaid themed party, whatcha got?”) and they delivered. The topper is wooden, very sturdy and is such a quality handmade piece. It will be a fun keepsake to keep from the party! Brittany Garner Design did the invites (obviously). Word on the street is she’s taking on a few custom design clients every month, so if you need invitations, I’d hop on it! Guests had to dive under water when they entered. Excuse the darkness, our entryway is basically a cave. 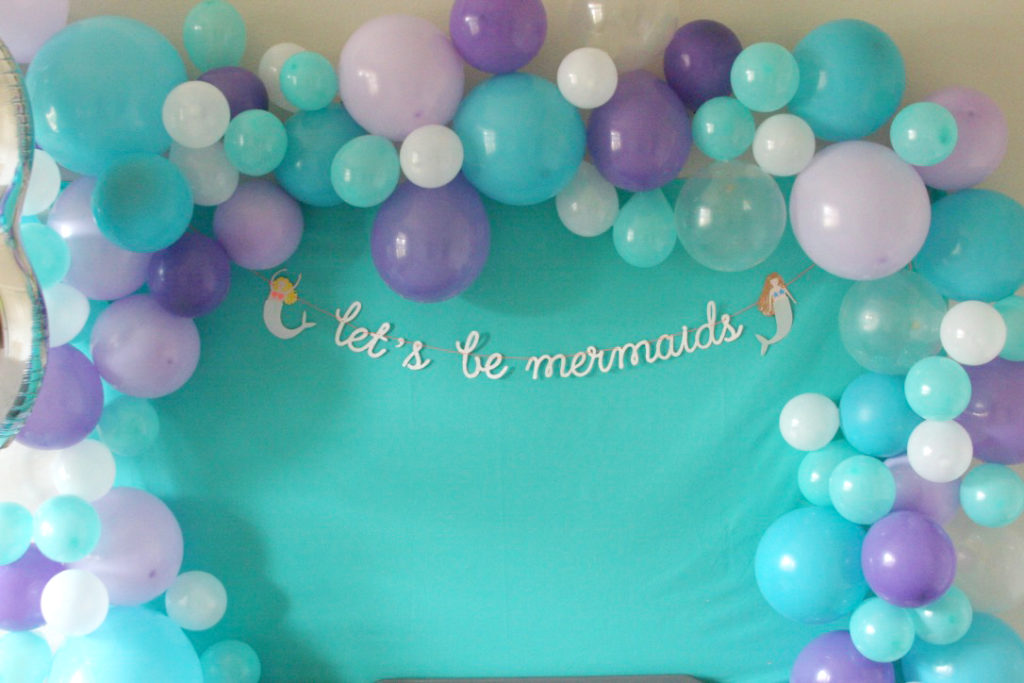 The balloon garland. This is probably my favorite party thing I’ve ever done. It was pretty simple, cheap and made such an impact. It also required about 1o million thumbtack holes in the wall, but that’s only a big deal if someone mentions that to the husband. We had a moment about 30 minutes prior to the party starting where Isla refused to wear anything but her new Belle nightgown. She was really committed to the character- book and all! It was looking like Belle was going to be making a special guest appearance under the sea and I wasn’t going to fight it (it’s her party and she can be Belle if she wants to), but luckily Brittany got her to change into her outfit. My mother in law made this mermaid skirt for her and it turned out so good! This was the best shot anybody got because Isla was just too excited to sit still. #JJmakesclothesforkidswhowontsitstill A few weeks before the party, we were at an event and a local company, The Fairy Godmother, had Ariel there. When Isla met her, she walked right up and gave her a big hug and talked to her. Isla, my daughter, who has trouble with eye contact and having conversations. She talked about meeting Ariel for about a week after that and I knew that if we were going to do a mermaid party, we had to have Ariel there too.

I cannot say enough good things about The Fairy Godmother. Everything is so well organized and they take making encounters with their characters so seriously to preserve the magic of it for the kids. The costumes, the sing along story, the activities…everything was executed perfectly. Ariel was so attentive to Isla an made her feel like a princess too. It was so obvious that Isla was having the time of her life. I don’t think she stopped smiling the whole time Ariel was here.

She even had to go change into her Ariel costume once she saw Ariel was here, even though Grandma spent an entire day making her mermaid tail skirt. Kids, amirite? She gave Ariel a hug like she had been expecting her the whole time. 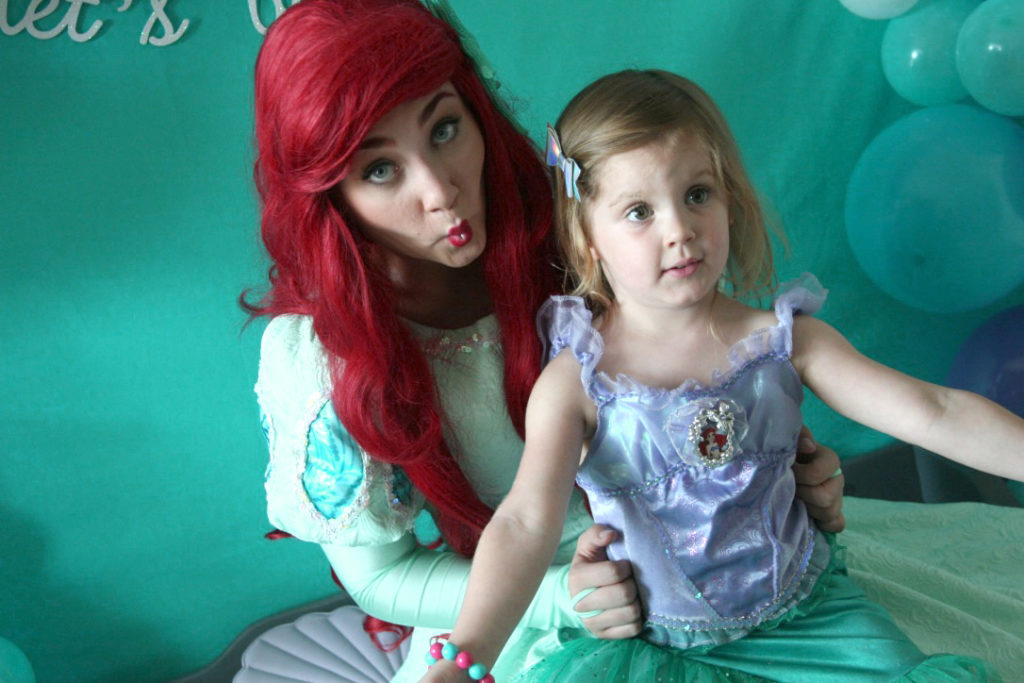 Ariel even painted nails with all the kids and gave Isla a dinglehopper. Guys. A dinglehopper. Seriously made her day. Maybe even life. Definitely her year. If you’re in the Sacramento area and thinking of having a princess or super hero at your kid’s birthday, I can’t recommend The Fairy Godmother enough. Worth every penny.

We also had a pull string piñata. You can read more about how I made that here. This was probably my favorite party I’ve ever planned. Isla was so excited the entire time, which was so rewarding. It’s rare that we know exactly what’s going on in her mind, but this day we did and that was worth all the prep, planning and money spent (and the 60 people crammed in our house because it was too hot to go outside that day!). Later that day she told me all on her own, “I love my mermaid party!” which just about made me cry because while gems like that are becoming more frequent, they’re still rare.

In fact, she’s still so pumped up on her birthday that she gets mad every day when she asks if we’re having a party and I have to tell her no. Sorry about that, girlfriend, but I’ll take it because you are talking, recalling, engaging with me and inviting me into your world and I’ll take every second of it!