Sullivan, now four years old, has gotten fevers since he was a baby. Last year, he was diagnosed with a Periodic Fever Syndrome: Periodic Fever, Aphthous Stomatitis, Pharyngitis, Cervical Adenitis or, PFAPA. Before I get in to our journey, here’s a little PFAPA 101:

I vividly remember the night I realized something was off. I was nursing an 18-month-old feverish Sully on the couch at 2am, going over in my mind all of the times I had been in this exact same position before. Same couch. Same boy. Same god awful hour. Same symptoms. Overall, Sully was a healthy and happy baby but every so often he would spike a fever and become lethargic. It never lasted more than a couple days. Every time we visited a doctor, it was written off as a childhood sickness, a virus with nothing we could do but wait it out. But as I sat there in the early morning hours, with my hot-to-the-touch baby boy, I wondered, surely 8 viruses in a year is not normal… right? 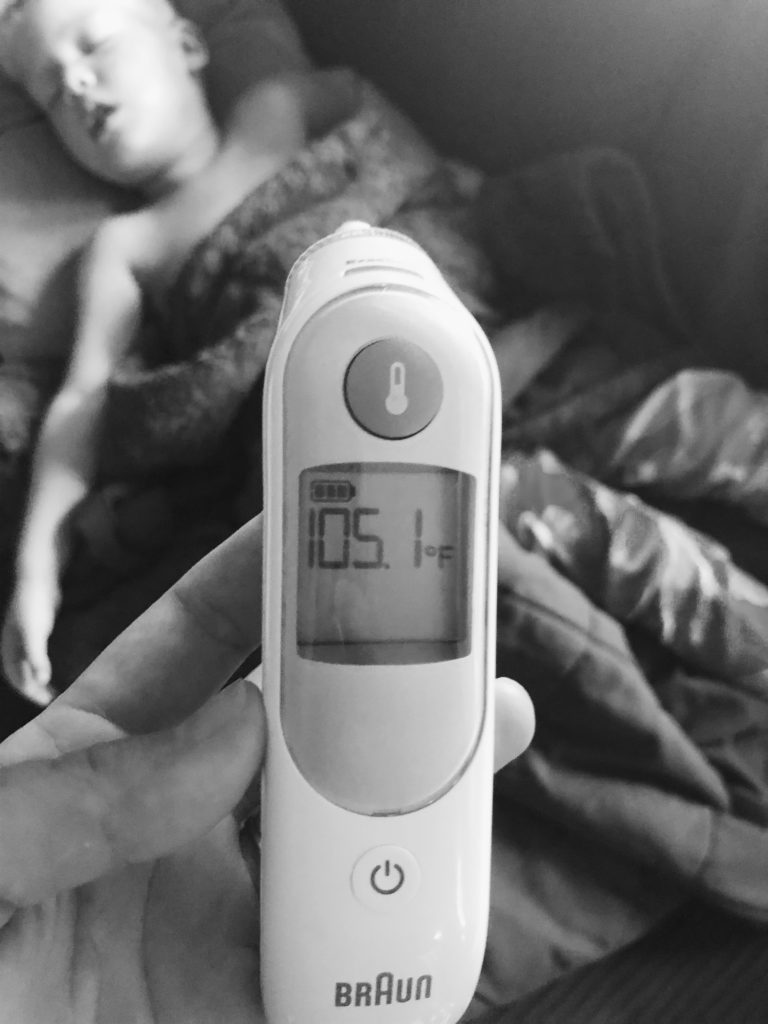 In those early stages, we went to a lot of doctor’s appointments where blood work was ordered followed by a Strep test. Over time, his blood work showed telltale signs of inflammation but the Strep test was always negative. It was maddening. How can a kid this young have all the signs of Strep throat (swollen glands, ulcers on the tonsils, fever) but the test always be negative? After about 6 months of tracking and relentlessly coming in for appointments, his doctor finally referred him to a specialist who diagnosed him with PFAPA.

I started keeping track of his fevers in December of 2016. Between then and now, August 2018, he has had a total of 24 episodes with body temperature ranging from 102 to 105.1 degrees.

At this point, I had done my own research (the kind you do at 2am, while pacing back and forth about a 105 degree fever, with Dr. Google then immediately regret) and had all but come to the PFAPA conclusion on my own but even so, it is such a relief to have an official diagnosis.

As he has gotten older, Sully has been able to communicate with us better about how he’s feeling. His chief complaints are of leg/joint pain, sore throat, headache and sometimes stomach pains. During a flare, we know to expect severe mood swings, extreme neediness, restlessness, and diarrhea. For Sully, the fevers last 2-4 days and I can usually tell when he is about to flare–crankiness, under eye circles and a shift in his energy levels. I call this the Build Up. It’s the period of time before the flare begins that is almost as bad as the flare itself. Sully also has a period after the flare that I call The Hangover. This period, after the fever breaks, lasts 2-3 days and he is generally grumpy and tired.

More than just the official symptoms, his flares effect our entire life. I would even venture to say that as life has gotten busier and the boys have gotten older, it has gotten so much harder. Technically, the fever is not contagious but he has missed so many days of daycare because he just wants to be home and snuggled up on me. I am definitely his source of comfort during a flare and I don’t take that lightly, it is an important job, but that doesn’t mean it isn’t hard AF. Sleep is basically nonexistent–during a flare he’s restless and almost frantic to be cuddled up/on top of me; desperate for comfort. He wakes constantly for drinks of water when the fever is highest. He has nightmares. All day long I work to make sure he’s comfortable, taking his “numbers,” giving him meds, dropping anything I’m doing when he says from the other room, “mom, I just need to cuddle.” Not to mention still having to handle pick up and drop off for Harrison and/or making sure he’s not bored out his mind being home all day.

As his mom, I know that when my life gets put on hold during a flare it is what I’m supposed to do, what he needs; that doesn’t make the overwhelm or guilt of it any easier. When all is said and done–The Build Up, The Fever and The Hangover–that’s 5-9 days every month our family is consumed by this disease. Is there a treatment?

Treatment for periodic fever syndromes is tricky. Some parents opt to do a prednisone shot at the first sign of a flare which stops the fever from spiking. A side effect of this could be the flares happening more often. Another option is surgical removal of tonsils/adenoids which has stopped flares altogether for some children but the research on that is mediocre and they’re not really sure why it works for some and not others.

Sully’s episodes are consistently once a month and we have chosen to wait it out in hopes that he will outgrow it (most kids do by age 5). If his flares get closer together or they start to effect attendance in school or other activities then we will reevaluate our plans. I go back and forth about this every day, I truly don’t know if it’s the right thing. Research is still so new and while I follow many PFAPA/Periodic Fever Syndrome Facebook groups full of knowledgable parents, what works for one child, might not work for another.

So, I’ll do what I do best. Talk about the hard shit, admit I know nothing, while I figure it out and hopefully learn a lot along the way.

Do you have a child diagnosed with PFAPA or another Periodic Fever Syndrome? I would love to hear your experience in the comments!